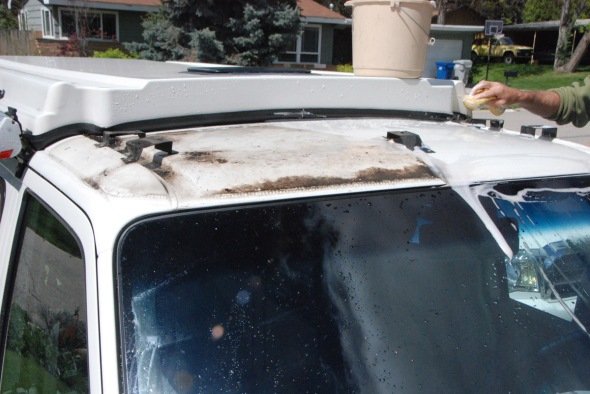 On our recent trip to California the luggage rack on the EVC made so much noise that I finally climbed up there and took a look at it to see what the trouble was. The recessed corners  of the plastic shell had cracked, thus making the rack’s connection to the Eurovan pretty flimsy. Even driving slowly through town, the noise was horrendous, like some roof-mounted troll thought the EVC was a piñata.

I duct-taped the rack and ordered the repair kit from GoWesty. Below is an account of my repair, which was as involved, time consuming, and difficult as I dreaded it would be. But now it’s done, and – most importantly – silent and way more resilient than Winnebago, in keeping with the American manufacturing credo of “barely good enough,” designed it to be.

This was the easiest part. GoWesty’s instructions are simple and worked just fine: unbolt everything and remove the rack.

What I saw after the rack was off was disgusting. Filth, slime, cracking silicone, and rusted, twisted metal brackets. I cleaned everything, let it dry completely, and then drilled the rivet heads off the original brackets so I could remove and replace them. Winnebago only riveted the outside of each bracket; the inside was “glued” onto the roof and the glue job on every bracket had long ago failed.

Winnebago filled the channel on each side of the Eurovan roof with a block of plastic which they siliconed or glued in place. I’ve read about this being a major leak-point for the campers, and sure enough big cracks were opening up around the edges of the plastic blocks. I scrubbed the cracks and filled them with clear silicone.

Since I’d had good luck with JB Weld on other plastic repairs (e.g., the battery cover under the hood) I decided to use it on the luggage rack. I cleaned the plastic, sanded the areas around the cracks, and cleaned it all with acetone.

I applied generous amounts of JB Weld to both the top and the bottom of each crack (waiting about 12 hours for the bottom to dry before turning it over and doing the top), making sure that I covered the long crack extensions at each corner. After the top had dried completely (24 hours), I painted the dark gray JB Weld with touch-up paint that I got from an auto paint store (paint code: R902, Arctic White). They mixed the paint while I waited; the dealer wanted twice the amount ($25) and two weeks to order it!

After repairing the cracks, I removed the old seal, which had rusted extensively on the inside, since there were bare metal clips holding the seal in place. I sanded and acetoned the edge of the plastic to remove the rust stains, and then installed the GoWesty replacement seal. This seal has a rubber bulb on one side, and the instructions didn’t indicate whether the bulb went on the inside or outside, so I called GoWesty and they got back to me quickly, indicating that the bulb goes on the inside. After installing it, I could easily see why: it forms an actual seal (unlike the original) that keeps the air from getting under the rack and buffeting it. The original seal and the shoddy material and installation of the original brackets allowed the rack over time to get buffeted to the point of cracking at the corners. UV damage also contributed, as the plastic is pretty brittle now.

This is the part I dreaded most because (a) it required drilling holes in the roof and (b) I had never used a rivet gun. GoWesty’s instructions were clear and simple as usual, and worked fine. What they don’t explain are the finer points of installing rivets, which is not their responsibility. As with installing the Fiamma awning, drilling holes in the Eurovan makes me nervous. With the luggage rack, there was the added difficulty of not drilling all the way through the headliner. [UPDATE: A  nice person sent me a comment saying that “Drill Stops” (about $4 at Home Depot) can prevent you from drilling through the headliner – GoWesty should update their instructions and recommend people use those to save their headliners.]

To install the brackets, first I siliconed the bottom of all four holes, then placed the bracket over the existing two holes. I installed the first rivet too loosely, which meant drilling it out and redoing it; luckily I had purchased an extra box of 3/16” rivets as GoWesty supplies only the exact number of rivets required (20). I learned from my mistake that to get a tight rivet you need to squeeze the rivet gun incrementally to get the full pull on the rivet. It took me two or three incremental pulls (squeeze, open the rivet gun handle, “swallow” the rivet back down to the head, squeeze again, “swallow” and squeeze until it breaks off the disposable rivet shaft).

After riveting the bracket into the two existing holes, I drilled (3/16” bit) the two inside holes. On the first one I went clean through the headliner. There is very little space between the roof metal and the headliner, which made drilling the other 9 holes quite nerve-wracking. Despite being extremely careful and drilling very slowly, I still made four holes in the headliner. Not much you can do there (anyone have a suggestion to prevent and/or repair the holes in the headliner?).

Once all brackets were riveted in place I siliconed over all the rivets and leading edges of the brackets to keep water from getting into the holes and leaking through the headliner. To my horror, after looking at the photos I’d just taken of the newly installed brackets, I realized I’d installed the front bracket backwards! I had to drill out all four rivets and re-install that bracket, which didn’t take me long since I’d improved my skill level with the rivet gun.

Re-installation of the Luggage Rack

After dismantling the rack, I sanded and repainted the rusted top brackets that secure the plactic shell to the roof-riveted brackets. Re-installing the entire rack was pretty straightforward, but required some elbow grease to get the holes in the plastic lined up with the threaded holes in the brackets. I bolted one side down loosely, then had to pull pretty hard on the other side to get those bolts threaded.

I’m sad to report that my time-consuming JB Weld job on the cracks failed at the two front corners, which were the biggest cracks in the rack. The back corner repairs held, and the top brackets have enough surface space to hold the plastic securely in place. After tightening the top brackets I siliconed the cracks in the front corners and can only hope they’ll last and keep from getting bigger. Since the rack isn’t vibrating and getting buffeted like it did originally, I’m optimistic. In the meantime, I’ll keep my eyes out for a flawless replacement plastic shell (haven’t had any luck finding one yet; any suggestions are welcomed!).

The impetus for getting this job done was an impending trip to the Olympic Peninsula. I’m happy to report that the damned thing was silent the whole trip, even during near-hurricane force winds in a couple spots. The cracks don’t seem to have grown, and I’m relieved to have this one behind me. Whether I’ll actually use the rack is another matter!

Even though we’re selling the van, I couldn’t rest knowing that the JB Weld had cracked again when we were driving through a 65 MPH wind storm on the Interstate coming home from Thanksgiving. So I went to an auto paint store, bought a little fiberglass repair kit ($25), and fixed that damned plastic tray for good!

Step 1: Remove luggage rack. This was made more difficult than it should have been because of the silicone I’d used to seal the brackets with; the good news was that the silicone held and there was no evidence of water getting under the brackets and rusting.

Step 2: Prep the plastic for fiberglass work. This was also more difficult because of the silicone I’d squirted over the JB Weld, which needed to be removed so the fiberglass/resin would stick. I used a chisel and some medium grit sandpaper to remove all the silicone, and to rough up the plastic so the resin would adhere.

Step 3: Cut fiberglass to shape for the bottom side. I only “fixed” the front corners of the rack; the original rear corner repairs had held, and they get way less buffeting than the front corners. I cut one large piece of cloth for each corner, and several smaller pieces to layer over the cracked areas.

Step 4: Mix and apply resin. I put a thin brushing of resin down on the plastic so the fiberglass cloth would stick more easily.

Step 5: Lay fiberglass cloth in place. Once the cloth hits the resin, it’s there for good, so before I put the resin down I traced the section of cloth with a Sharpie so I could set it down where it needed to go.

Step 6: Brush resin over cloth. I made sure to eliminate air bubbles and get enough resin into the cloth.

Step 7: Add additional cloth layers. Putting a couple more layers of cloth over the cracks really built up the corners and needed minimal amounts of resin for saturation.

Step 8: Repeat for top-side of rack. Once the resin dried on the bottom, which only took a couple hours, I flipped the rack over and started on the top side, repeating steps 3-7.

Step 9: Sand and paint. Since UV rays can weaken the fiberglass (according to the instructions), I followed the recommendation to put a layer of paint over the repaired areas (I didn’t do this on the underside because it never gets any direct light). I used a white Rustoleum spray paint, which took overnight to dry.

Step 10: Drill holes for re-installation. Since the fiberglass covered the original mounting holes, I had to drill them out. I used a small bit to reduce the size of the mounting holes from the original, thinking it would increase the strength of the tray in the mounting areas. I had to test fit it a couple times to get the holes to line up so all eight bolts and the center screw would line up.

Step 11: Cut rubber grommets for brackets. I decided to put thin rubber pads (made from a road bike inner tube) under the brackets to maybe reduce the buffeting stress a wee bit; the metal edges of the brackets on the brittle plastic tray seemed to be harsh enough – before this repair – to cause the plastic to crack. I cut pieces to size and used a hole punch (like you learned to use in Kindergarten) and put them under the brackets before installing the bolts.

Step 12: Bolt (and screw) in place. I hand-tightened all 8 bolts, then put the center screw in place (I made a tiny grommet for this, too). Then I tightened all bolts, re-torqued the screw (this is hard because I used the original Phillips head screw, which – because it’s hard to get to, being right in the center of the vehicle), and then installed the bar on the brackets with the two bolts.

I’m very pleased with the results of this repair and think that it should hold for a long, long time. What it lacks in beauty it should more than make up for in strength. I have to admit that during the two days I worked on this I kept wishing I had a spare $600 to buy the OEM replacement that GoWesty sells…